For newly diagnosed MM (NDMM) patients, the introduction of proteasome inhibitors (PIs) and immunomodulatory drugs (IMiDs) has improved treatment responses versus older therapies. Carfilzomib is a novel, highly selective tetrapeptide epoxyketone proteasome inhibitor for use in patients with multiple myeloma who have received at least two prior therapies and have demonstrated disease progression on or within 60 days of completion of the last therapy.

Carfilzomib Structure
Carfilzomib is a synthetic tetrapeptide consisting of morpholin-4-acetyl, L-2-amino-4-phenylbutanoyl, L-leucyl and L-phenylalanyl residues joined in sequence with the C-terminus connected to the amino group of (2S)-2-amino-4-methyl-1-[(2R)-2-methyloxiran-2-yl]-1-oxopentan-1-one via an amide linkage. 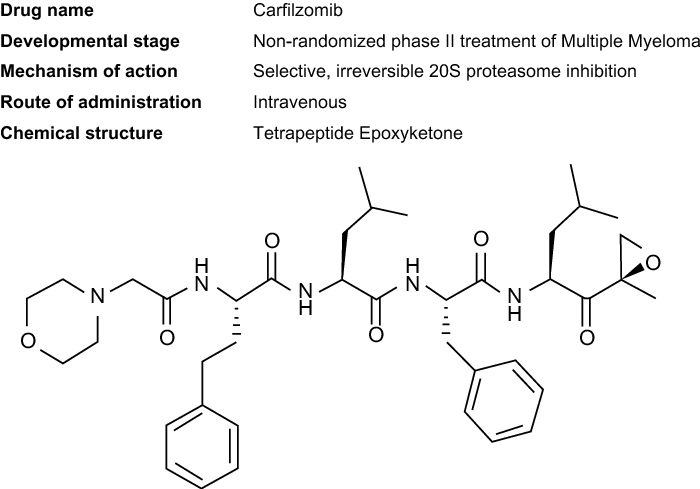 Mechanism of Action: How Does Carfilzomib Work?

Carfilzomib irreversibly binds to and inhibits the chymotrypsin-like activity of the 20S catalytic core subunit of the proteasome. Proteasome is part of the cellular machinery and has many functions within the cell, such as it helps to control the level of many of the proteins that help to regulate cell division and cell survival. By interfering with its function this can lead to apoptosis (cell suicide). In the laboratory, it has been shown that cancer cells are more susceptible to the effects of proteasome inhibitors than normal cells are. 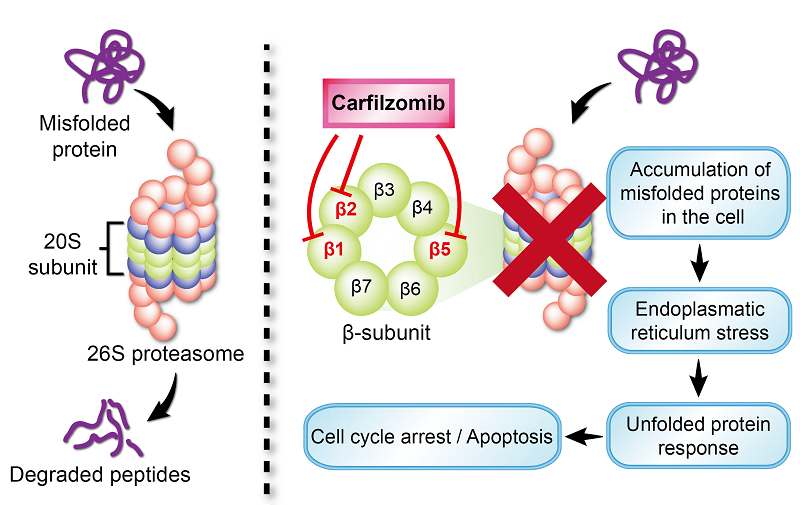