What Are The World's Top Selling Drugs?

After reviewing the top 10 oncology pharmaceutical companies 2020, now let's find the top 10 best-selling drugs in the world of 2020. 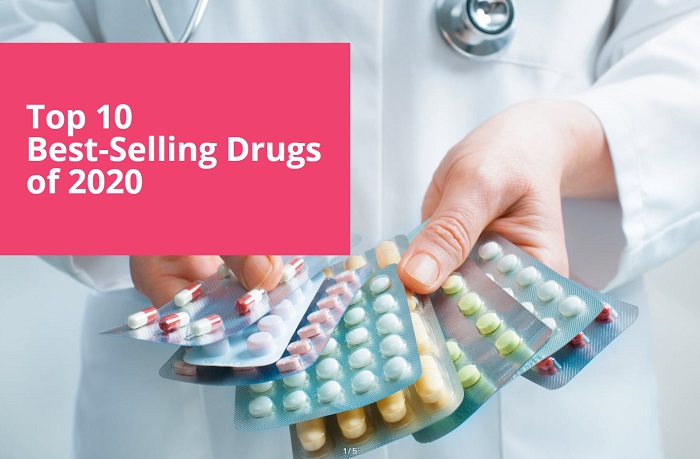 Adalimumab faced competition from European biosimilars for the first time in 2019, when its international sales declined by up to 31%. However, during the COVID-19 epidemic in 2020, adalimumab sales increased every quarter, from $4.77 billion in the first quarter to $5.15 billion in the fourth quarter, due to the inconvenience of patients visiting hospitals and the tendency to maintain their original treatment.

Adalimumab will remain at the head of the immune field for the next few years, with its biggest rival being Johnson & Johnson's Stelara, which generated sales of $7.71 billion last year. The U.S. biosimilar market is also seeing increased competition as adalimumab's patent expiration date approaches in 2023.

Merck seized the opportunity when immune targets became a direction of treatment for cancer. Keytruda could claim the top spot by 2023 when AbbVie’s Humira patent expires.

The immuno-oncology market is changing rapidly. Sales of Opdivo, also a PD-1 inhibitor, have been declining, while Keytruda has received seven FDA approvals in the past 10 months.

Keytruda is an important advance in the treatment of advanced cancers with a large number of genetic mutations, often in children with TMB-H cancers that are difficult to cure. Keytruda has also received approval for relapsed or metastatic squamous cell carcinoma of the skin that cannot be cured by surgery or radiation therapy, and for the first-line treatment of patients with metastatic or inoperable colorectal cancer with high microsatellite instability or mismatch repair defects.

Keytruda is also approved for the treatment of Hodgkin's lymphoma and breast cancer, as well as an approval last month for the treatment of patients with locally advanced or metastatic esophageal or gastroesophageal junction cancer. Merck continues its efforts to extend the drug's patent life through co-formulations, combinations and alternate routes of administration.

Revlimid, approved by the FDA in 2005, had a down period after being acquired in 2019, but last year it reached sales of more than $12 billion, jumping to the top three drugs by annual sales. This was achieved with multiple price increases for Revlimid. Celgene sold the drug initially for $215, but after 20 price increases, it now costs more than $750. Celgene used these aggressive price increases to reach its financial goals.

Both Celgene and BMS struggled to keep Revlimid safe from generic competition. Shortly after the acquisition was completed, the U.S. Patent and Trademark Office denied Revlimid's application to invalidate three patents. Last year, however, BMS made concessions to allow Indian generic drug makers to produce a limited number of generics after March 2022, and the three drugmakers mentioned in the agreement signed by BMS can launch an unlimited number of generics in 2026.

BMS was willing to free up the market for Revlimid generics as they had just received two CAR-T approvals and they were in the early stages of the key launch phases for anemia, multiple sclerosis and acute myeloid leukemia. BMS was confident of future gains.

Mechanism of action: inhibitor of free and clot-bound factor Xa

Eliquis, jointly developed by Pfizer and BMS, was approved by the EMA in 2011 and by the FDA in 2012. Eliquis ranks as the fifth best-selling drug in the world with annual sales of more than $9 billion in 2020.

Pfizer funds around half of the development costs, and the two companies share profits and losses equally. In some countries, Pfizer sells the drug and pays BMS a fee. Pfizer and BMS have changed dramatically in recent years as Eliquis sales have soared. Pfizer moved both its generic and off-patent Upjohn businesses to focus more on innovation and new drugs, and BMS acquired Celgene.

Prescriptions for oral anticoagulants show an overall downward trend during the COVID-19 epidemic in 2020, with a rebound in volume by early 2021. Eliquis sales jumped 37% to $2.6 billion in the first quarter as related studies showed that blood thinners can boost the efficacy of COVID-19.

Eliquis sales increased 16% over 2019. Pfizer earned a total of $4.95 billion in joint revenue with BMS and direct sales. The outlook for Eliquis is good as the market expands further.

Imbruvica is now one of the world's leading anti-blood cancer drugs, with sales reaching $8.43 billion last year, demonstrating its dominance in the BTK inhibitor market.

Johnson & Johnson acquired 50% of Imbruvica for less than $1 billion in 2011, and four years later Imbruvica's price skyrocketed due to AbbVie's $21 billion acquisition of Pharmacyclics and a lone product. A year later, Imbruvica received key approval as the first chemotherapy-free treatment for first-line chronic lymphocytic leukemia patients. Since then, the therapy has received six more approvals, the last three in combination with other drugs.

But like other drugs, Imbruvica faces challengers. The first is AstraZeneca's Calquence, approved by the FDA in November 2019, with long-term data published last year showing that treated patients with cytosolic lymphoma had an average disease duration of 22 months without progression and a survival rate of more than 50% after three years.

Another competitor is Brukinsa from BeiGene, which is only approved in the US for condyloma lymphoma. The drug won the nod in China for recurrent SLL / CLL. Late last year, BeiGene showed that for marginal zone lymphoma, Brukinsa elicited responses in 74% of patients and completely eliminated the cancer in 24% within a year. The corresponding figures for Imbruvika were 48% and 5%, respectively, although the trials did not compare the two drugs with each other.

To keep Imbruvica sales growing, AbbVie built a strong patent wall around it, extending its exclusivity patent period by nine years, shielding it from biosimilar competition and thus allowing prices to remain high and bring in more revenue.

Eylea booked $8.36 billion in 2020 sales, split between $4.95 billion for Regeneron in the U.S., and $2.82 billion for Bayer, which markets the macular degeneration drug outside the U.S.

Due to the COVID-19 outbreak, new patients only got access to Eylea in late March and early April, but the drug still performed better in the first quarter than most of the year. In the second quarter, Eylea sales declined 4 percent but still exceeded expectations, and by the fourth quarter, Eylea sales were up 10 percent and full-year sales were up 7 percent over 2019.

Eylea's competitor is Novartis' Beovu, however, last year it was reported that Beovu may be linked to obstructive retinal vasculitis, which may lead to vision loss. Regeneron and Bayer used this to promote Eylea's drug safety. In April 2020, the National Institutes of Health released data showing that Eylea reduces the risk of developing vision-threatening complications by 68 percent.

But in the middle of last year, Novartis filed a lawsuit against Regeneron for infringement of the pre-filled syringe technology, setting off an all-out patent battle between Regeneron and Novartis in the ophthalmology field.

Stelara's approval in ulcerative colitis has a strong impact on its sales growth in 2020. Meanwhile, the FDA's safety warning for Stelara's two JAK inhibitor competitors (Xeljanz and Rinvoq) has also helped its market share capture. Johnson & Johnson has cut the price of its IL-12 / 23 significantly to remain competitive in light of growing competition. Despite this, Stelara achieved $7.94 billion in revenue last year, an increase of nearly 20% over 2019.

But Stelara also faces threats from the price side. One is from competing drugs, and after Johnson & Johnson reported third-quarter results, it is considering discounting and reducing prices on its products to secure market share. The second is from government controls on drug prices, combined with high unemployment and other effects, and price pressure could continue into 2021.

In terms of biopharmaceutical competition, a familiar fight is believed to be the Keytruda-Opdivo battle, which is akin to Pepsi and Coke.

During the development process, they competed with each other as immune checkpoint inhibitor rivals, and were approved by FDA successively in the same year. Early on, Opdivo was in the lead, but later on, the development was quite opposite. Keytruda sales grew 29% in 2020, while Opdivo's share continued to shrink as Keytruda's market share continued to grow, but Opdivo's declined 2%. And in each quarter of 2020 and the last quarter of 2019, Opdivo sales declined compared to the same period last year.

Keytruda received 7 FDA approvals in 2019, but no gains for Opdivo. In non-squamous non-small cell lung cancer, the combination therapy of Opdivo with chemotherapy also did not show a significant improvement in efficacy over chemotherapy alone.

But in 2020, Opdivo has received seven FDA approvals, two of which were in combination with Bristol's CTLA4 immunotherapy Yervoy, for use in key NSCLC areas. There have also been recent positive evaluations for gastric and esophageal cancers. In addition, last October, Opdivo reported another NSCLC win - a positive effect of Opdivo in combination with chemotherapy prior to surgery, with Opdivo beating several competitors, including its dreaded nemesis.

Opdivo was first shown to be effective in treating muscle-invasive bladder cancer in a clinical trial in February of this year. This was followed by another clinical success in April - patients with early-stage non-small cell lung cancer who were treated with a combination of Opdivo and chemotherapy prior to surgery were nearly 14 times more likely to have cancer-free tissue in their resected tissue than patients treated with chemotherapy alone. This is a milestone in the yet-to-be-realized adoption of Keytuda.

The competition among PD-1 inhibitors is being rekindled.

Compared to 2019, Biktarvy's 2020 sales increase by 53%, jumping from the 17th to the 9th best-selling drug, far exceeding the original projected goal.

Although Biktarvy sales jumped $2.52 billion in 2020, a large portion of patients using Biktarvy were originally using Gilead's other anti-HIV products, which had a $1.93 billion sales decline. Overall, Gilead's HIV products generated sales of $16.94 billion in 2020. Although this figure represents 69 percent of the company's total revenue, Gilead's HIV drug revenue is up just 3 percent from 2019.

Biktarvy's competition doesn't just come from the inside of the company, such as Descovy, which saw its sales in the U.S. jump from $1.08 billion in 2019 to $1.53 billion last year.

Competition from outside the company is equally strong. GSK has been in the HIV space for two decades, and its joint venture with Pfizer and Shionogi, ViiV Healthcare, introduces strong challengers to the market every few years. ViiV is pinning its latest hopes on Dovato, a two-drug combination with a better safety profile that generated $374 million in sales in its first year of approval in 2019.

Mechanism of action: inhibitor of free and clot-bound factor Xa

In 2020, Xarelto's total revenue was about $6.93 billion, slightly more than its $6.35 billion in 2019. Bayer received $4.58 billion of that amount, while Johnson & Johnson received about $2.35 billion. 9% sales growth was not enough to gain an edge against Pfizer and BMS' Eliquis, which had full-year sales of about $9.17 billion, and Eliquis continues to dominate the blood thinner segment.

The FDA approved Xarelto in October 2019 to help prevent blood clots in acutely ill patients and without a high risk of bleeding during and after hospitalization.The FDA's nod marks the sixth indication for Xarelto for blood clots, while Eliquis is for the third indication. Last March, the American College of Medicine (ACM) released data showing that the combination of Xarelto and aspirin resulted in a 15% reduction in the risk of major limb and cardiovascular events in patients with symptomatic peripheral arterial disease.

As a reliable pharmaceutical intermediates supplier, Huateng Pharma is able to provide the services of pharma intermediates's process development and scale-up production with capacities varying from gram to kilograms and multi tons. We have our own industrial park of 34,000 square meters that has been completed and put into operation since 2020 to support multi tons production.