Baloxavir Marboxil for Uncomplicated Influenza: Mechanism of Action & Side Effects

Date of publication：2019/12/4 15:49:07
With thousands of people getting the flu every year, and many people becoming seriously ill, having safe and effective treatment alternatives is critical.

Baloxavir marboxil, marketed as Xofluza, is a first-in-class, one-dose oral agent first approved by the FDA in 2018 for the treatment of acute, uncomplicated influenza in individuals 12 years and older, who have been symptomatic for less than 24 hours. It is the first new antiviral with a novel mechanism of action to treat influenza in 20 years. 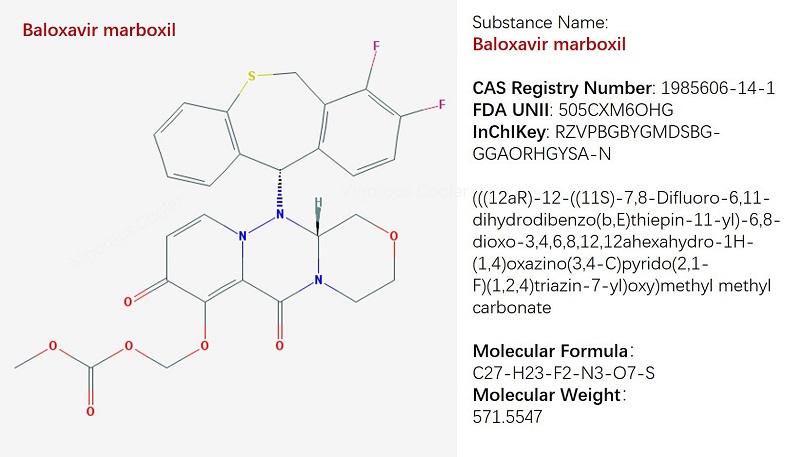 Baloxavir marboxil differs from oseltamivir (marketed as Tamiflu, also available generic) in its mechanism of action.

On the other hand, Oseltamivir inhibits the action of the viral enzyme neuraminidase (which lets viruses bud and spread from the infected cell).

Baloxavir Marboxil Mechanism of Action, Image Source: nejm.org
​
Last year, Hayden and his colleagues published a study in the New England Journal of Medicine that compared baloxavir with placebo and oseltamivir. The study found the following results:

In addition, according to the Japan Times, NIID said that a mutant influenza virus resistant to baloxavir was found in patients in December 2018. This is the first influenza virus mutation discovered by a national research institution since the drug was put into practical use.

In December 2018, two of four elementary school students in Yokohama were found to be resistant to the Xofluza virus during a general screening after they had earlier developed flu symptoms. The mutant virus is 76-120 times more resistant to the drug than the unmutated virus detected by the other two children.

In clinical trials of the drug, drug-resistant viruses were detected in 23.4% of subjects younger than 12 years of age.

Anyway, there will be challenges. It will take time to work through the difficulties.