Influenza (referred to as flu) is an acute respiratory infection caused by influenza virus, and it is also a highly contagious and fast-spreading disease.

Oseltamivir, as the only oral neuraminidase inhibitor drug in the world, has long been recognized as one of the most effective influenza drugs in the world.

Oseltamivir can be metabolized by the human body into a neuraminidase inhibitor (NI), thereby inhibiting the formation of new virus particles, reducing its spread in the human body, and alleviating flu symptoms.

Today's article will share with you the development history of this blockbuster drug.

There are three types of human influenza viruses: A, B, and C, which are the pathogens of influenza (flu). 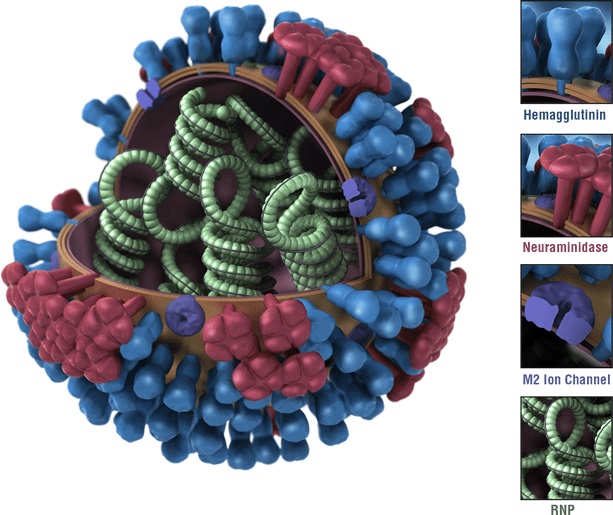 Among them, NA is a glycoprotein composed of four subunits. The most characterized function of NA is its action as a sialidase enzyme. The enzyme helps viruses to be released after budding from the plasma membrane of a host cell. Influenza virus membranes contain two glycoproteins: hemagglutinin and neuraminidase. While the hemagglutinin on the surface of the virion is needed for infection, its presence inhibits the release of the particle after budding. Viral neuraminidase cleaves terminal neuraminic acid (also called sialic acid) residues from glycan structures on the surface of the infected cell. This promotes the release of progeny viruses and the spread of the virus from the host cell to uninfected surrounding cells. Neuraminidase also cleaves sialic acid residues from viral proteins, preventing aggregation of viruses.

According to the theoretical evidence, the researchers speculate that the mechanism of neuraminidase is that the substrate undergoes hydrolysis of the a-glycosidic bond under the action of neuraminidase to generate ion intermediate 1, and then water molecules attack 1, and continue the subsequent reaction process.

The catalytic mechanism of neuraminidase

Therefore, the design principle of Neuraminidase inhibitors (NAIs) is to simulate the ionic configuration of intermediate 1 in the transition state of sialic acid, interfere with the NA catalytic reaction process, and then exert an antiviral effect.

As mentioned earlier, the design principle of neuraminidase inhibitors is to mimic the ionic configuration of intermediate 1 in the transition state of sialic acid.

The first influenza virus neuraminidase inhibitor based on substrate design came into being, which is substrate analog 2.

Molecular structure of compound 1 and 2

However, although the substrate analogue 2 shows certain neuraminidase inhibitory activity in vitro, it has no specific selectivity for influenza virus and has no activity in animal models of influenza infection. After that, the researchers began to make simple structural modifications to 2 in an attempt to find more preferred compounds. However, the activity of the new derivatives in vivo is still not ideal, and all the sialic acid analogs have no higher inhibitory activity against influenza virus neuraminidase than the substrate analog 2.

In view of this, the von Itzstein research team started from the crystal structure of neuraminidase and conducted a structure-based drug design system study. According to research, it is found that replacing the C4 hydroxyl group in the substrate analog 2 with an amino group can further enhance the strength of the salt bridge formed by the new compound and the Glu119 residue, thereby improving its activity.

Molecular structure of compound 3 and 4

In 1992, Norbert Bischofberger of Gilead Sciences discovered at an ICAAC annual meeting that the zanamivir being developed by GlaxoSmithKline may become a real antiviral drug, but its chemical structure is not suitable for oral administration. .

Although scientists at Biota and GlaxoSmithKline feel that the inhaled method may be more advantageous because the virus mainly affects the patient's respiratory system, Bischofberger believes that patients may prefer oral administration when faced with both oral and inhaled administration methods.

So he decided to devote himself to the development of oral anti-flu drugs. Soon after the meeting, a 10-person scientific research team vigorously invested in the research and development of the anti-fluid drug project at the headquarters of Gilead.

Initially, the molecular design of oseltamivir was very similar to zanamivir. Gilead scientists used transition state intermediate 1 and substrate analog 2 as the initial research objects. In order to facilitate structural modification and transformation, the researchers replaced the dihydropyran ring skeleton in the substrate analog 2 with a carbon ring.

At the same time, Intermediate 1 is a phosphonium salt containing a double bond. Based on the principle of isosteres, the researchers decided to replace the dihydropyran ring with cycloalkenes to obtain compounds 5 and 6.

The structure-activity relationship study of compounds 5 and 6 found that the position of the double bond in the carbocyclic compound is very critical to the activity of the compound. Compound 5 showed obvious inhibitory activity on neuraminidase, and finally compound 5 was further studied.

Gilead researchers conducted a large number of technical demonstrations in the early stage, and finally decided to further modify the alkyl part of the alkoxy substituent in the seed compound 5. The C1 carboxyl group, C4 acetylamino group, and C5 amino group are temporarily retained, and only the C3 substituent is further modified. The researchers synthesized a large number of R group derivatives and substituted the R group with 2-ethylpropyl to obtain compound 14. The inhibitory activity against influenza A and B viruses increased suddenly, and the IC value reached the level of nmol/L.

Continue to replace the R group, compounds with better activity can be obtained, but these compounds are either effective against only one of influenza A and B viruses, or the structure is more complex than compound 14 while with equivalent activity. Therefore, Gilead identified the R group as 2-ethylpropyl and numbered compound 14 as GS4071.

Unfortunately, although GS4071 has excellent in vitro anti-A and B NA activity, in vivo activity (mice) studies have found that its bioavailability is low and cannot be developed into an oral drug. Gilead scientists quickly found a solution, by esterifying compound GS4071 to make a prodrug, and then change its absorption performance. 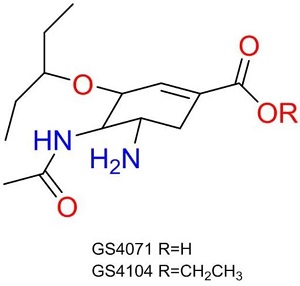 After a lot of systematic research, researchers finally selected GS4104 as the prodrug of GS4071, which has the most comprehensive performance. At this point, the compound structure of oseltamivir was finally determined.

In 1996, Roche Pharmaceuticals obtained the right to use oseltamivir and began clinical research.

In 1998, Oseltamivir obtained a compound patent in the United States.

Huateng Pharma, as a professional manufacturer of pharmaceutical APIs and intermediates, provides Tamiflu API and intermediates with full-scale production. We have a 34000m2 product base and a 5000m2 R&D lab that can meet the requirement of worldwide clients.

Related articles:
[1] The Basic Things We Have To Know About Influenza Virus
[2] Xofluza vs. Tamiflu: Differences Between The Antiviral Flu Treatments
[3] Baloxavir Marboxil for Uncomplicated Influenza: Mechanism of Action & Side Effects