Breast cancer is the number one malignancy that seriously threatens women's health. According to GLOBOCAN 2020 Global Cancer Report, 2,261,419 new cases of breast cancer will occur in 2020, accounting for 11.7% of all cancer cases, ranking No. 1, followed by lung cancer, colorectal cancer, prostate cancer and stomach cancer. 687,111 people died from breast cancer in 2020, accounting for 6.9% of all cancer deaths, ranking No. 5, with the top 4 being lung cancer, colorectal cancer, liver cancer and stomach cancer. 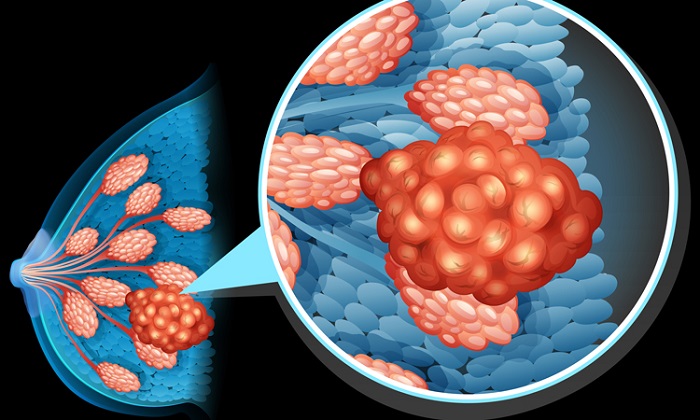 There are three types of breast cancer including HR+/HER2-, HER2+ (HR+/HR-) and TNBC (triple negative breast cancer), with the population share of each staging being 70%, 15-20% and 15%. Of the three types, TNBC is the most aggressive, with a median overall survival (mOS) of only 1 year after the development of metastases, although the early five-year survival rate can reach 85%. TNBC is ineffective against both commonly used endocrine therapies and HER2-targeted drugs, and its treatment options are very limited, so there is an urgent need to launch drugs with better efficacy.

The pathological type of TNBC is usually basal-like and highly aggressive, with distant recurrence peaking as early as 3 years after diagnosis. gBRCA1/2 mutations (germline BRCA1/2 mutations) account for 15% of TNBC, and thus DNA repair defects may be a potential therapeutic target for TNBC patients. PARP inhibitors exploit DNA repair defects to selectively kill cells with homologous recombination repair defects, especially for patients with BRCA1/2 mutations.The PARP inhibitor Olaparib has been shown to be effective in tumors with gBRCA mutations (breast and ovarian cancers, etc.), but its use in patients with advanced TNBC associated with non-gBRCA mutations remains to be clinically studied.

Clinical studies of PARP inhibitors in combination with chemotherapy, immunosuppressants and other target inhibitors (such as VEGFR, Hsp90, P13K/AKT/mTOR etc) for the treatment of TNBC are currently underway.

TROP-2 is a transmembrane glycoprotein identified from human trophoblast cells and is involved in a variety of intracellular signaling pathways. TROP-2 plays an important role in the development of embryonic organs, but it is also an oncogene associated with the development, invasion and metastasis of malignant tumors. TROP-2 is overexpressed in epithelial cell carcinomas such as breast cancer, colorectal cancer and esophageal squamous cell carcinomas, but is low expression in normal tissues. Therefore, it can be a natural candidate target for epithelial cell carcinomas such as TNBC. 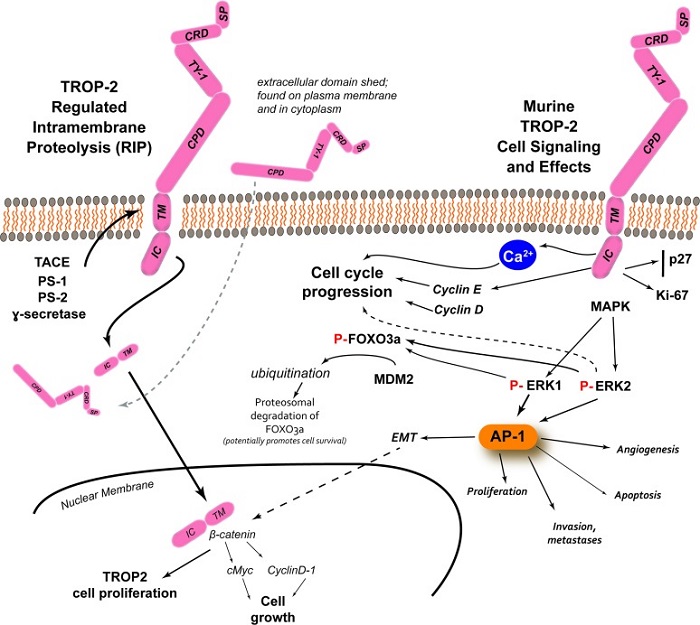 TROP-2 is present in breast cancer tumor cells in a broadly heterogeneous manner, and its signaling function is activated by antibody-mediated cross-linking of cell surface molecules or by intramembrane cleavage.TROP-2 activation status is a key determinant of breast cancer tumor progression and is a strong indicator of survival in breast cancer patients. It was found that cell membrane localized and mature glycosylated TROP-2 was associated with reduced survival in cancer patients, while intracellularly retained TROP-2 was associated with reduced disease recurrence and improved survival.

In 2020 the US FDA approved an ADC drug targeting TROP-2 for third-line therapy in metastatic TNBC, Sacituzumab govitecan (trade name Trodelvy). It is an ADC drug originally developed by Immunomedics (acquired by Gilead) and consists of a humanized IgGl antibody targeting the TROP-2 antigen conjugated to SN-38, the metabolically active product of irinotecan.

Trodelvy is developed with PEG chains as part of their linker technology to improve solubility and stability in vivo. We can supply 2-((Azido-PEG8-carbamoyl)methoxy)acetic acid (CAS no. 846549-37-9), which works as a linker for Trodelvy.

Figure 2. Structure of IMMU-132 (Sacituzumab govitecan, DAR 7.6), an ADC that utilizes an acid-cleavable carbonate linkage (encircled) to the topoisomerase I inhibitor, SN-38.

An international multicenter clinical trial (ASCENT: NCT02574455) compared the efficacy and safety of Trodelvy with Eribulin, Capecitabine, Gemcitabine or Vinorelbine in a controlled manner. The results showed that Trodelvy was outperformed by chemotherapeutic agents, extending mPFS (4.8 vs 1.7 months) and mOS (11.8 vs 6.9 months). Trodelvy's clinical TROPICS-02 in HR+/HER2-negative breast cancer is in Phase III and clinical HER2-negative breast cancer (SASCIA) is ongoing. A variety of drugs, including antibodies and ADCs targeting TROP-2, are in development globally.

CDK4/6 inhibitors have greatly improved progression-free survival and overall survival in patients with HR+/HER2-negative advanced breast cancer. The approval of palbociclib marks the transition from the era of endocrine therapy to a new era of targeted combined endocrine therapy for breast cancer. To date, four CDK4/6 inhibitors are available worldwide (see figure 3), of which only Trilaciclib is in Phase III clinical trials for TNBC.

Trilaciclib was approved for marketing in February 2021 to reduce the frequency of myelosuppression in patients with extensive-stage small cell lung cancer who are receiving chemotherapy. It is the world's first and only prophylactic dose to protect myeloid and immune system function during chemotherapy. The U.S. FDA granted Fast Track designation for Trilaciclib in combination with chemotherapy for the treatment of locally advanced or metastatic TNBC in July of the same year. A double-blind, international, multicenter, placebo-controlled Phase III clinical trial (NCT04799249) is underway to evaluate the efficacy of Trilaciclib in patients with unresectable, locally advanced or metastatic TNBC receiving chemotherapy (gemcitabine and carboplatin) in first or second line (second line chemotherapy refers to prior immunotherapy with PD-1/L1). Completion is expected in October 2024. Results from a previously completed Phase II clinical trial (G1T28-04) showed a significant improvement in mOS with Trilaciclib in combination with chemotherapy in patients with metastatic TNBC compared to when chemotherapy was administered alone (19.8 vs. 12.6 months). If Trilaciclib is successful in the phase III clinical setting for TNBC, it will open a new chapter for CDK4/6 inhibitors in TNBC. 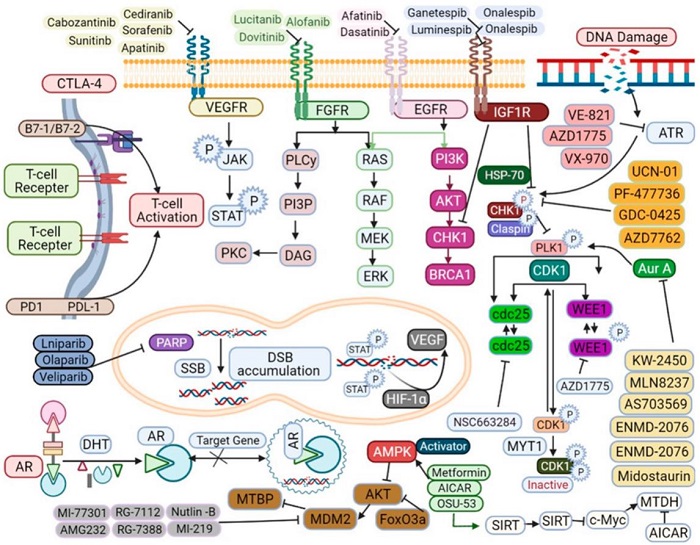